What Is Addressable TV Advertising? 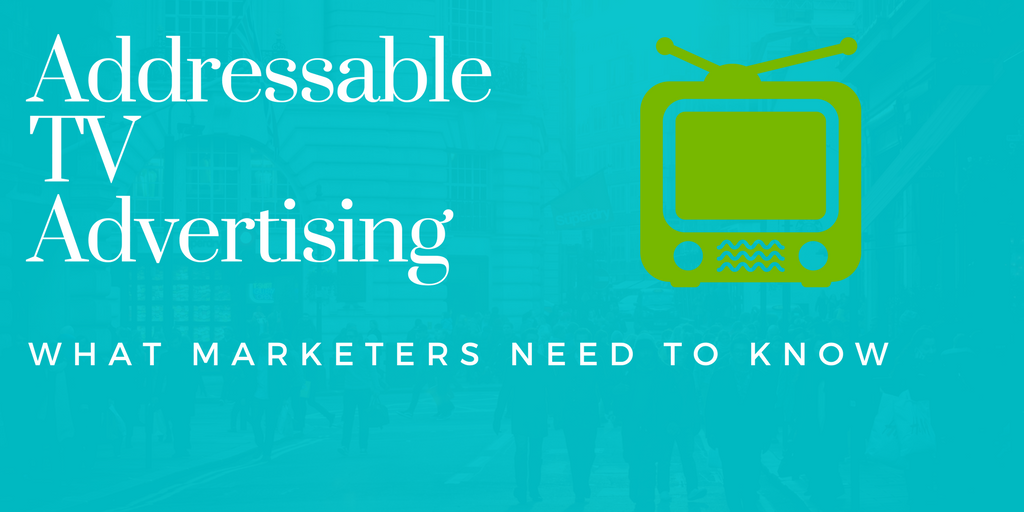 Addressable TV advertising has been quietly increasing over the last few years and whilst it only accounts for a fraction of the overall spend on TV advertising, at a meagre 1.3%, that number is set to rise over the next few years.

In this article we’ll explore why it’s time to take note of addressable TV advertising but first here’s what it entails:

TV is often criticised for lacking the targeting of its digital peer platforms. Programmatic advertising was hailed as an advance in changing this discrepancy but TV’s ability to target is becoming even more refined thanks to addressable advertising.

The difference between programmatic and addressable TV advertising

While programmatic advertising can help your advert reach specifically targeted views by identifying the prime TV placements based on advanced audience data, irrelevant people might still view these programmes.

This household targeting combined with real-time targeting helps differentiate addressable advertising from programmatic. With the real-time targeting, the system can figure out audience composition in real time to decipher the most appropriate adverts to show.

“Each individual advertiser reaches only those households that qualify. Segmentation can occur at geographic, demographic and behavioral levels.” –Altitude Digital

Of course, addressable is still technically a form of programmatic advertising but you could say it is more advanced in its targeting.

“Advertisers can now buy audiences instead of programs—similar to the programmatic display and video buying processes utilized on desktop and mobile devices. Unlike standard programmatic TV advertising, there is no need to preselect availabilities, and no need to predict who will be watching.”- Altitude Digital

This is very similar to how online advertising works, where marketers might specify their target audience through ‘audience building’ interfaces such as Facebook’s Power Editor, which allows them to ensure their adverts will only reach people who meet the criteria specified.

We may be biased here at The Living Room but we would say that, based on Television advertising’s superior performance to digital in recent years, addressable will only help widen the gap and improve the efficiency of TV advertising compared to digital.

What will the affect be of addressable advertising?

With addressable advertising advertisers will have the ability to buy ‘fewer but much more targeted impressions’ according to Econsultancy.

This might also mean more niche businesses start deciding to utilising TV, as they can reach their target audience far more effectively with addressable than with traditional TV advertising.

Although this is very exciting to those in the industry, uptake is currently modest and according to eMarketer addressable TV spend was only at $400 million in the US in 2015, rising to a predicted $890m in 2016 and topping out at $2 billion by 2018.

Still, encouraging signs and great to see such innovative solutions being brought to TV advertisers.

Want to talk programmatic, addressable or conventional TV advertising? Get in touch with The Living Room today!